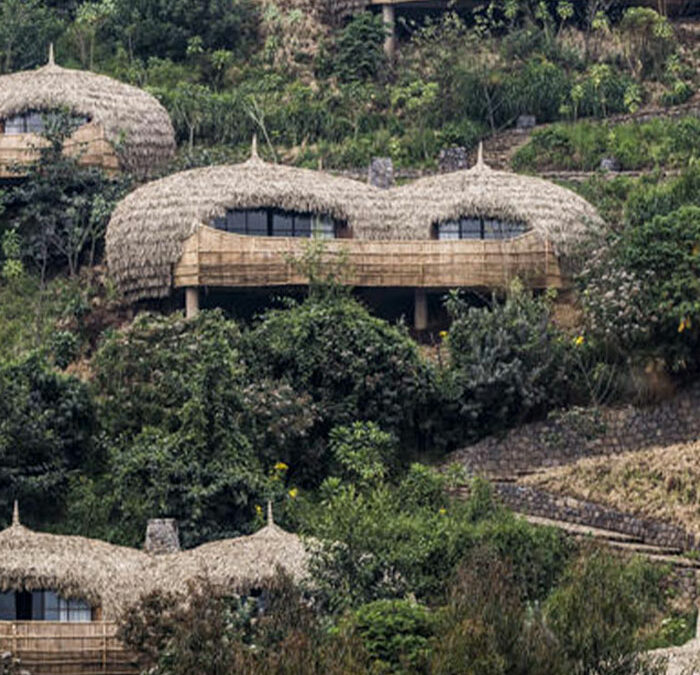 A tribute to Rwandan culture

Bisate Lodge is a visually striking luxury feat in the heart of Rwanda’s pristine East African Rift – a natural biodiversity hotspot and home to more than half the world’s endangered mountain gorillas. A tribute to Rwandan architecture, the conically shaped sleeping pods have been designed to mimic traditional huts. These ultra-luxurious 91 square meter forest villas open out onto breathtaking views of the surrounding Bisoke and Karisimbi volcanoes and Afro-alpine forests.

The lodge is located on an amphitheatre formed by ancient eroded volcano cones. Bordering the world famous Volcanoes National Park, where Dr Dian Fossey conducted her famed research on the mountain gorillas, Bisate is the perfect base for a once-in-a-lifetime gorilla trekking experience. The park is also home to over 60 mammal and bird species found nowhere else on the planet including the endangered golden monkeys found only in the Virunga region.

Bisate Lodge is the ultimate marriage of traditional and contemporary luxury. The exquisite interiors feature floor to ceiling windows, utilizing the extraordinary views as a main feature. The lodge has also established two indigenous nurseries and planted over 2,000 trees as part of a massive community reforestation project. Farm to table dishes like wild honey, kale, papaya, pineapple, macadamia nuts and much more are sourced from the onsite kitchen garden and used in delectable meals for guests. Bisate embraces Rwandan culture in all aspects while offering travelers comfort, warmth and luxury in the heart of this wild region.

Like what you see? Each and every trip we create at Ker & Downey® Africa is tailored to suit you. Get in touch with our LuxVenture® Designers who can create something unique, just for you!

Our tagline Pioneering African Travel is a daily challenge to each and every member of Ker & Downey® Africa. It is one that continually inspires us to push the boundaries of African travel with a spirit of adventure and exploration.
Read about Ker & Downey® Africa