Holly Budge has been referred to as “one of the UK’s most accomplished female adventurers”. And when you look at her list of impressive accolades and achievements, it’s really no surprise why. From summiting Mount Everest – the Earth’s highest mountain – and becoming the first woman to skydive Everest, to taking part in the world’s longest horse race across the Mongolian desert, Holly’s feats are not only hair-raising, but wildly impressive!

And they don’t stop there. Holly is also the founder of the innovative design-led charity, How Many Elephants – an NGO focused on educating the world about the devastating impacts of the African elephant ivory trade, as well as supporting female anti-poaching rangers on the front line. The latter has led Holly herself to the front line, accompanying the Akashinga Rangers in Zimbabwe and The Black Mambas in South Africa in their pioneering and bold anti-poaching efforts. After witnessing the incredible work these fierce females are doing, not only for the animals, but also for their communities, Holly launched World Female Ranger Week (23 – 30 June) – an initiative that celebrates and supports the bold, brave and resilient female rangers that are standing alongside their male counterparts at the forefront of conservation.

As if that isn’t enough on her plate, Holly is also an accomplished keynote speaker on mindset, motivation and goal setting.

We were beyond thrilled when she accepted our offer to have a chat around the campfire.

Holly, thanks for joining us! Tell us, what was life like before you first flung yourself out of a plane in New Zealand and embarked on your life as a fully-fledged adventurer?

I started life as an adventurer at an early age and spent a lot of my childhood outdoors. When I was 21, I threw myself out of a perfectly good aeroplane for the first time. That 60 seconds of sheer adrenaline (and terror!) changed the course of my life forever. I made a decision right there and then to learn to skydive and get employed as a freefall camera woman. A pretty far-fetched goal given that I knew nothing about filming or skydiving! But none of that mattered because I knew I could give it my best shot.

I eventually landed my ‘dream job’ and was getting paid to jump out of aeroplanes up to 12 times a day, every day, with cameras strapped to various parts of my body.

Holly’s love for skydiving led her to become the first woman to skydive Mount Everest on October 6th 2008.

I eventually landed my ‘dream job’ and was getting paid to jump out of aeroplanes up to 12 times a day, every day, with cameras strapped to various parts of my body. Achieving this huge goal gave me an immense self-belief that I could succeed in whatever I put my mind to. This adventurous spirit and resilient mindset has led me on some incredible adventures including bagging a world record for racing 1000km across Mongolia on semi wild horses and more recently, patrolling with female anti-poaching rangers on the front line in Africa.

You have been on some epic expeditions in your life. From skydiving Everest to racing 1000kms across Mongolia on horseback, the list goes on! What is next on your adventure bucket list?

My definition of adventure has changed over the past two decades. In my twenties, I was chasing world firsts and world records. In my thirties, I was looking for more meaningful adventures. Now in my forties, it’s all about adventure with purpose! Patrolling on the front lines with anti-poaching teams in Africa has blown any other adventure I’ve done out of the water. It’s pretty scary at times, especially when ambushing, but it’s a totally real, meaningful and impactful adventure.

You’re galloping across the desert and a shiny lamp in the dust catches your eye. You stop and pick it up and out pops a genie. You’re granted three wishes. What are they?

I would wish for the foresight to see the consequences of my wishes before making them. After receiving that wish, I would decide on my other two.

Animal conservation is an important part of your life and a great passion for you. It has led you to start a number of great initiatives. One of them being How Many Elephants – a creative non-profit that aims to educate about the devastating impacts of the African elephant ivory trade. Can you share the story that led you to start this inspiring NGO?

In 2013, I studied for a Masters in Sustainable Design and the idea for ‘How Many Elephants’, now a UK registered charity, was born. As I began researching the African elephant crisis, I was shocked by the poaching statistics and set about creating a fresh design-led awareness campaign. I was specific in my goal to create a 100% non-gory and non-political campaign. I designed and built a necklace displaying 96 elephants – the daily poaching rate in Africa – cut in vegetable ivory, a sustainable plant material from South America. I then designed a hard-hitting exhibition displaying 35,000 elephant silhouettes to represent the annual poaching rate.

In essence, I’m using design as a powerful communication tool to bridge the gap between scientific data and human connection.

For people to see and connect with this data in a purely visual and factual way has proved to be highly successful in terms of engagement and impact. In essence, I’m using design as a powerful communication tool to bridge the gap between scientific data and human connection.

How Many Elephants quickly gained momentum as the exhibition travelled to international audiences, receiving global recognition. My next focus was on supporting female rangers. Why female rangers specifically? I have found the more specific I am about my goals, the greater the motivation, clarity and impact I have.

How Many Elephants officially launched World Female Ranger Week this year – congratulations! As proud supporters of the Black Mambas, we couldn’t be happier. What are a few unique qualities that women bring to protecting wildlife and uplifting their communities?

The female ranger movement in Africa, and beyond, has shown great success and is building as women are natural communicators, strengthening relationships within their communities, easing local tension and investing their earned income into their families.

I’ve spent several weeks immersed on the front line with all female and mixed ranger teams across Africa, including The Black Mambas in South Africa, Akashinga in Zimbabwe and Mara Elephant Project and Big Life Foundation in Kenya, all of whom are direct action initiatives I support through How Many Elephants. The Black Mambas are armed with pepper spray and handcuffs, the Akashinga rangers with AK47’s, but all of these teams are making huge strides forward for wildlife conservation and female empowerment.

Their often-challenging work on the front line, defending wildlife and protecting wild spaces, makes a difference. These women are also transforming attitudes towards the role of women in Africa, and beyond.

Holly and a ranger from Akashinga, or ‘The Brave Ones’, an all female anti-poaching ranger unit in Zimbabwe

For example, the Black Mambas in South Africa have dismantled and seized more than 1500 deadly snares and destroyed record numbers of poachers’ camps. As a result, the number of snaring and poaching incidents in Balule Nature Reserve, where the Black Mambas operate, has fallen by 76%.

This was the inspiration behind the recent launch of World Female Ranger Week, taking place annually on June 23 – 30th, to raise awareness and funds for female rangers. So far I have identified over 4500 female rangers in 18 African countries and 5500 female rangers worldwide. It is the first week-long awareness campaign to celebrate and support female wildlife rangers around the world and provide a platform to share their stories, access peer support and share best practice.

Many of these inspirational female rangers have overcome adversity, poverty and marginalisation. Becoming a ranger has empowered them, turned them into breadwinners and property owners, and gave them access to higher education and much-needed healthcare. Their often-challenging work on the front line, defending wildlife and protecting wild spaces, makes a difference. These women are also transforming attitudes towards the role of women in Africa, and beyond.

What are your thoughts on eco-tourism and how do you believe it can play a role in combating poaching?

I believe eco-tourism is a force for good if it is sustainable and well-managed. It plays an important role in supporting conservation and provides a revenue stream (through park and guiding fees, and accommodation) to pay for rangers to protect local biodiversity and help combat poaching. 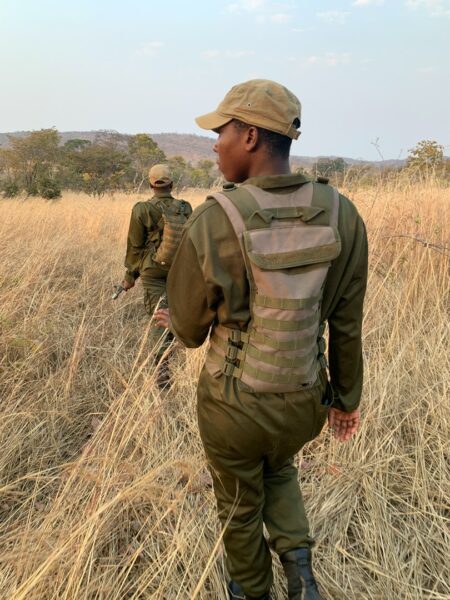 The Akashinga team of rangers is revolutionizing the way animals are protected and communities are empowered.

The lack of tourist dollars through the pandemic led to many rangers losing their jobs or having significant salary cuts. The knock-on effect of this has been huge as one ranger in Africa may support up to 16 family members.

Rangers play a critical role in patrolling and disrupting landscapes to protect the wildlife; it is often impossible for them to monitor such vast areas by themselves and the mere presence of tourists can protect wildlife by providing an extra set of eyes on the ground. The lack of tourist dollars through the pandemic led to many rangers losing their jobs or having significant salary cuts. The knock-on effect of this has been huge as one ranger in Africa may support up to 16 family members.

If you had a time travel machine, where would you go? What year is it? And what are you experiencing?

Africa. 1800. 26 million elephants roaming the savannahs and few people to be seen!

Keep an eye out for more conversations and inspiring stories from bold achievers from both in and out of the travel industry with Ker & Downey® Africa’s Fireside Chats. There’s plenty more in store to whet your travel appetite!

Our tagline Pioneering African Travel is a daily challenge to each and every member of Ker & Downey® Africa. It is one that continually inspires us to push the boundaries of African travel with a spirit of adventure and exploration.
Read about Ker & Downey® Africa